Before we kick-off with the new growing season (sneak peek: first seeds and seedlings are in the ground!), I wanted to wrap up our experiences from the past year, so here's a little flashback with what we've been up to last spring and summer!

What can you expect following winter gardening? Spring harvest obviously! Still, a busy harvest time in April and May was a new sensation for this Northern European.

A typical view during harvest time, in April (!)

Since Malta experiences mild winters, followed by warm springs and (at times scorching) hot summers, it makes sense that instead of the growing sequence of the higher latitudes, where we have to wait for episodes of frost to pass, here in the Mediterranean it is the availability of water that ultimately dictates the best growing season. Therefore, the months between September and May lend themselves best for vegetable growing, unless you have a good irrigation system in place.

Chris’ fathers fields have been in their family for generations, and in terms of farming technology and design, not much has changed over time. The land is split up in small plots by the archetypal Maltese rubble walls, intricately made by carefully fitting and placing stones on top of each other so they form a solid, durable wall, without any cement or other binding material. Watering the plants is also done in an old-fashioned way: by hauling up buckets of water from the well. Although this has proven to be beneficial to our biceps, you can imagine that to keep up with the water requirements of vegetables during Southern European summer, this requires too much hard work, and too much water. The water level in the well dropped significantly after winter and spring, and after the start of the dry summer season, will not be replenished until autumn. 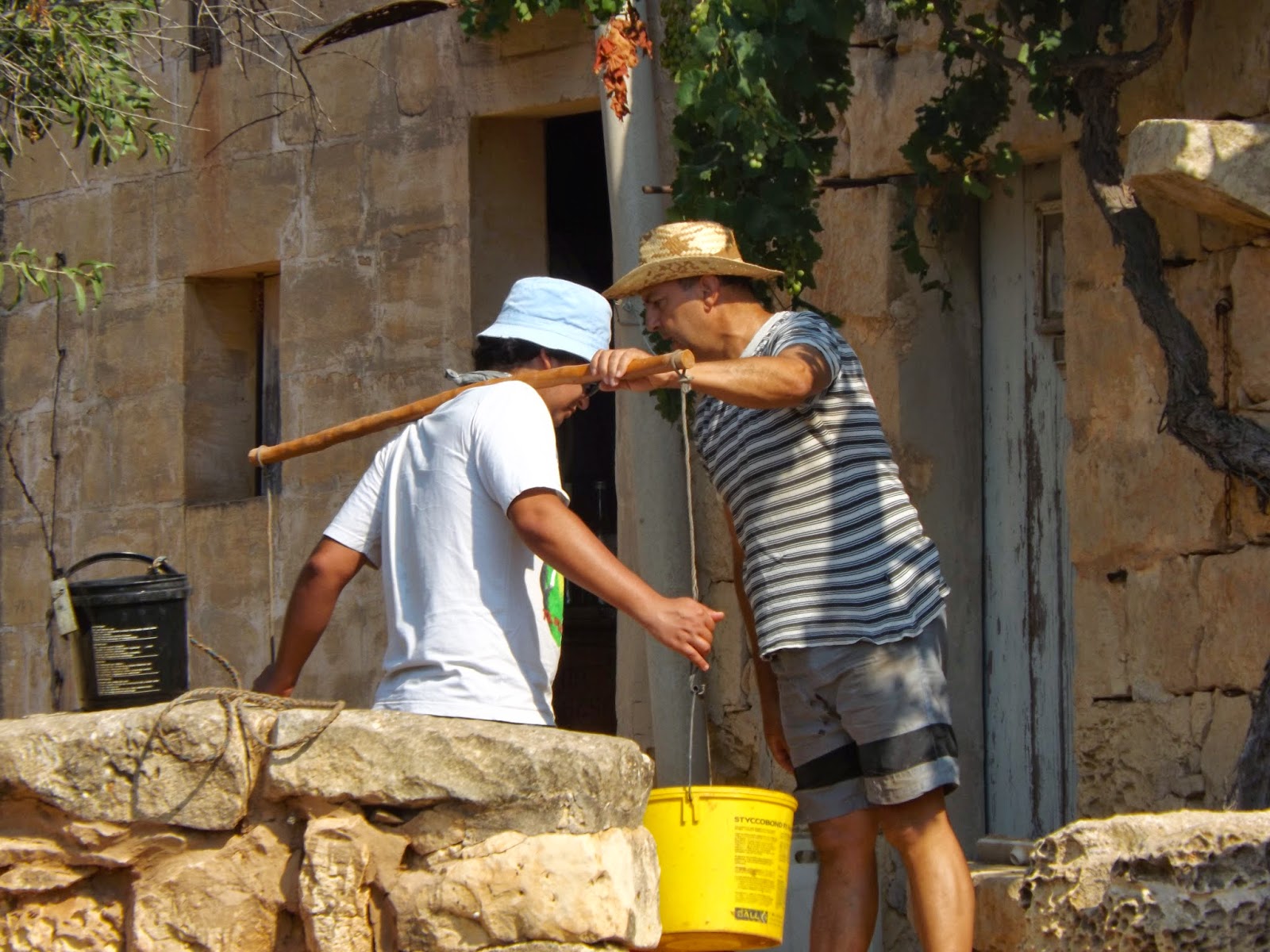 Hauling water from the well

We planted most of our vegetables between November and January, to benefit from some natural rainfall in addition to our weekly manual irrigation when we visited the fields. And with success! The feeling of eating your own produce, of knowing how it was grown, of remembering the way the fields looked just 2 or 3 months before when you were planting tiny seeds, is simply amazing. Although it is basic biology, I still found myself in awe at the way in which those seeds developed into fully grown plants, bearing edible, and delicious, fruits.

We ended up with more beetroot, spinach, broad beans, peas, potatoes, onions and garlic than we could possibly eat up! Therefore, we had to think of how to save, process and store all the produce. We have quite a big freezer, which offered a solution for at least part of the produce. We blanched, cooled and dried spinach leaves, as well as the leaves of beetroot (which are perfectly edible, and a nice change from spinach) before packing them tightly in boxes and bags, trying to squeeze out as much air as possible to avoid freezer burn. The beans and peas were very voluminous, so we peeled mounds of them to take them out of their pods and transfer them to bags in the freezer. Initially we blanched them, cooled them and dried them before transferring them to the freezer, but this is a very cumbersome process and since we expect to eat them within a year, is not really necessary (or so I've been told). Peas (piżelli) in their pods 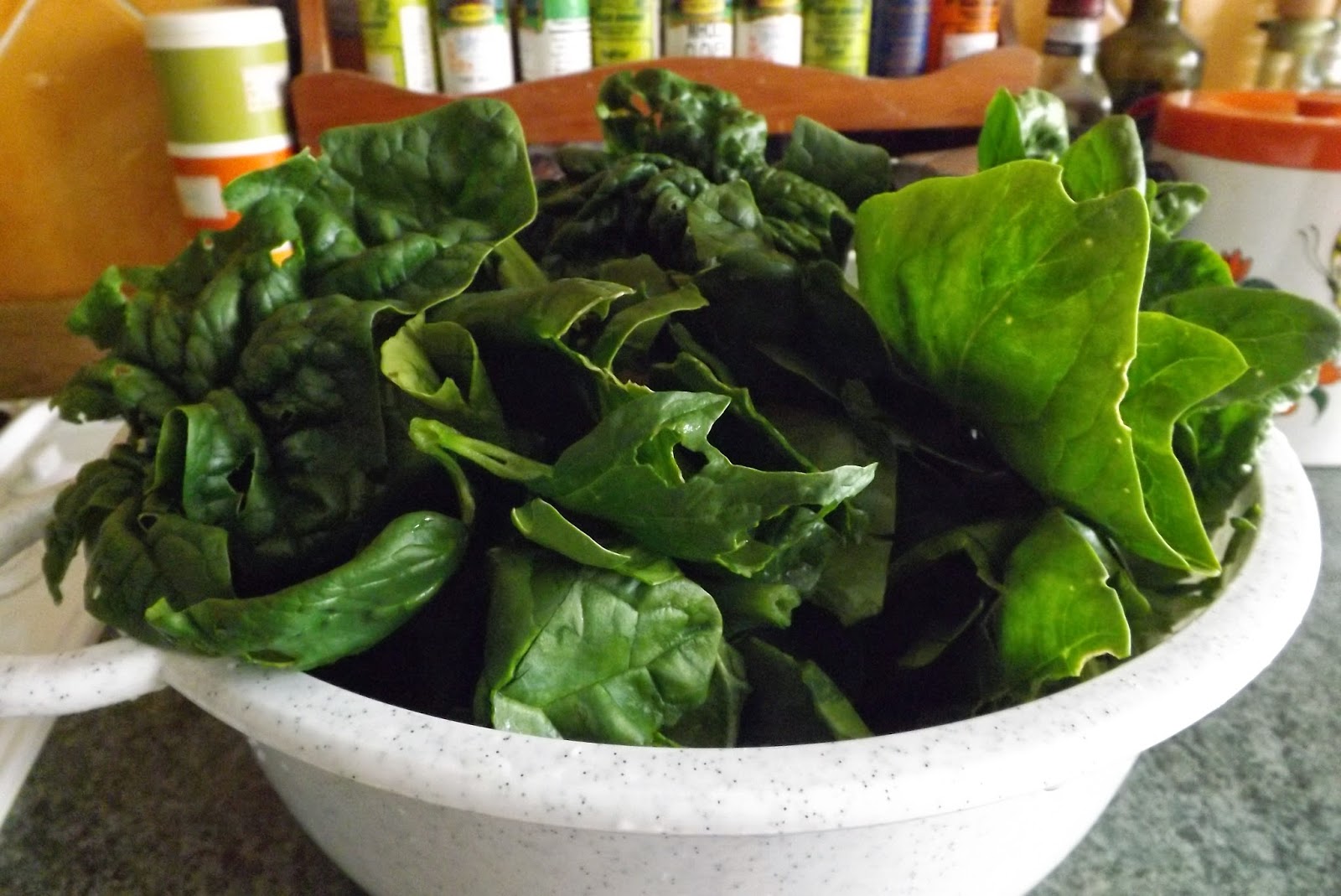 For the beetroot I had another idea in store. Recently I came across some mason jars (Weck jars), as well as an article on fermentation. I decided to try it out using the beetroot. The first batch I made just with sliced beetroot (uncooked, but peeled) packed in a jar with filtered water, bay leaves from our own bay tree on the roof, fennel seeds, garlic and salt. Having read that the smaller the pieces, the easier the fermentation, I prepared another batch by grating beetroot and some cabbage, and seasoning them in a similar way. Both methods worked out fine, although the sliced beetroot was more crunchy and raw than the properly fermented grated batch. After about a month of fermentation in a kitchen cupboard I transferred the jars to the fridge, to halt the fermentation process and keep the contents well preserved for several more months. 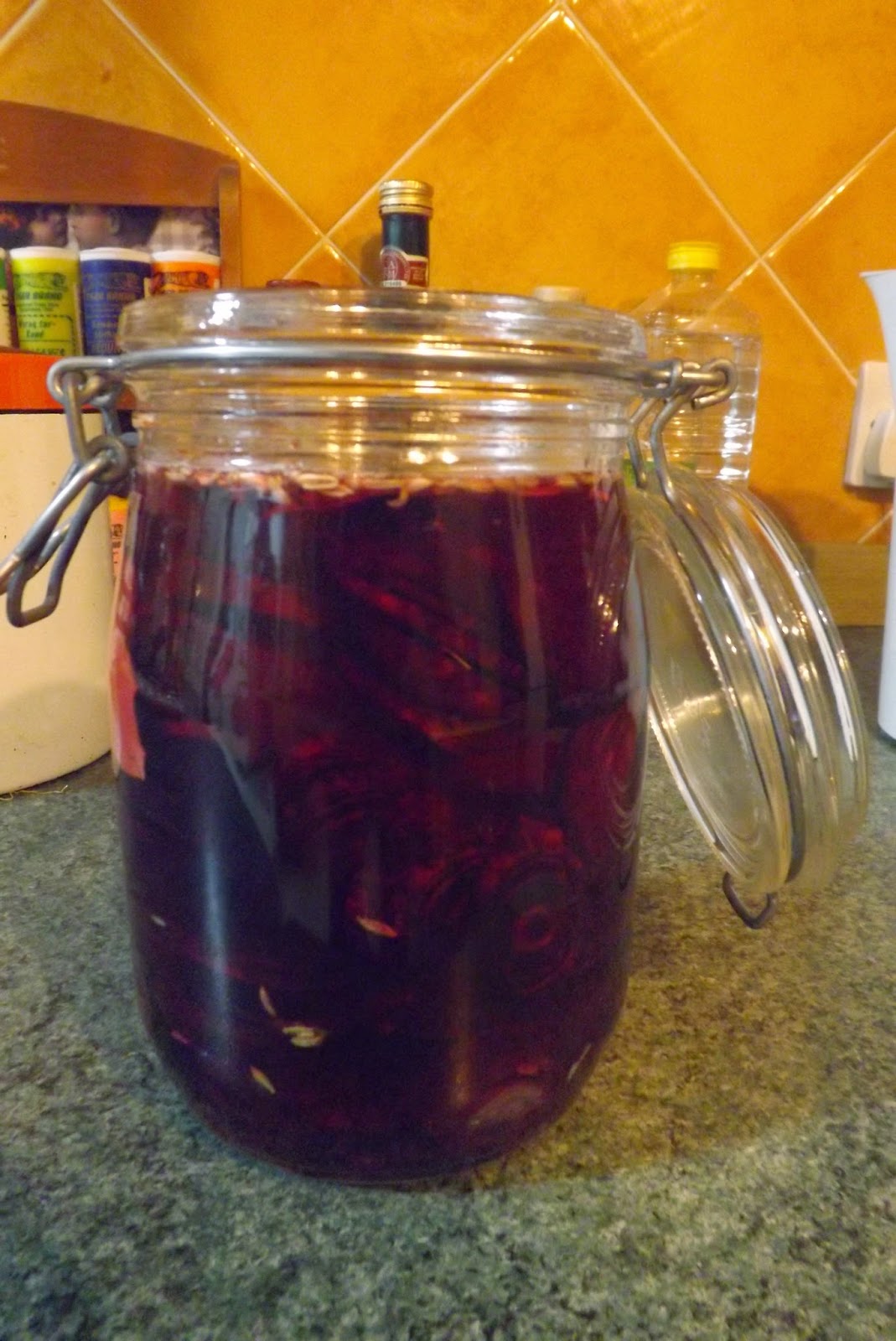 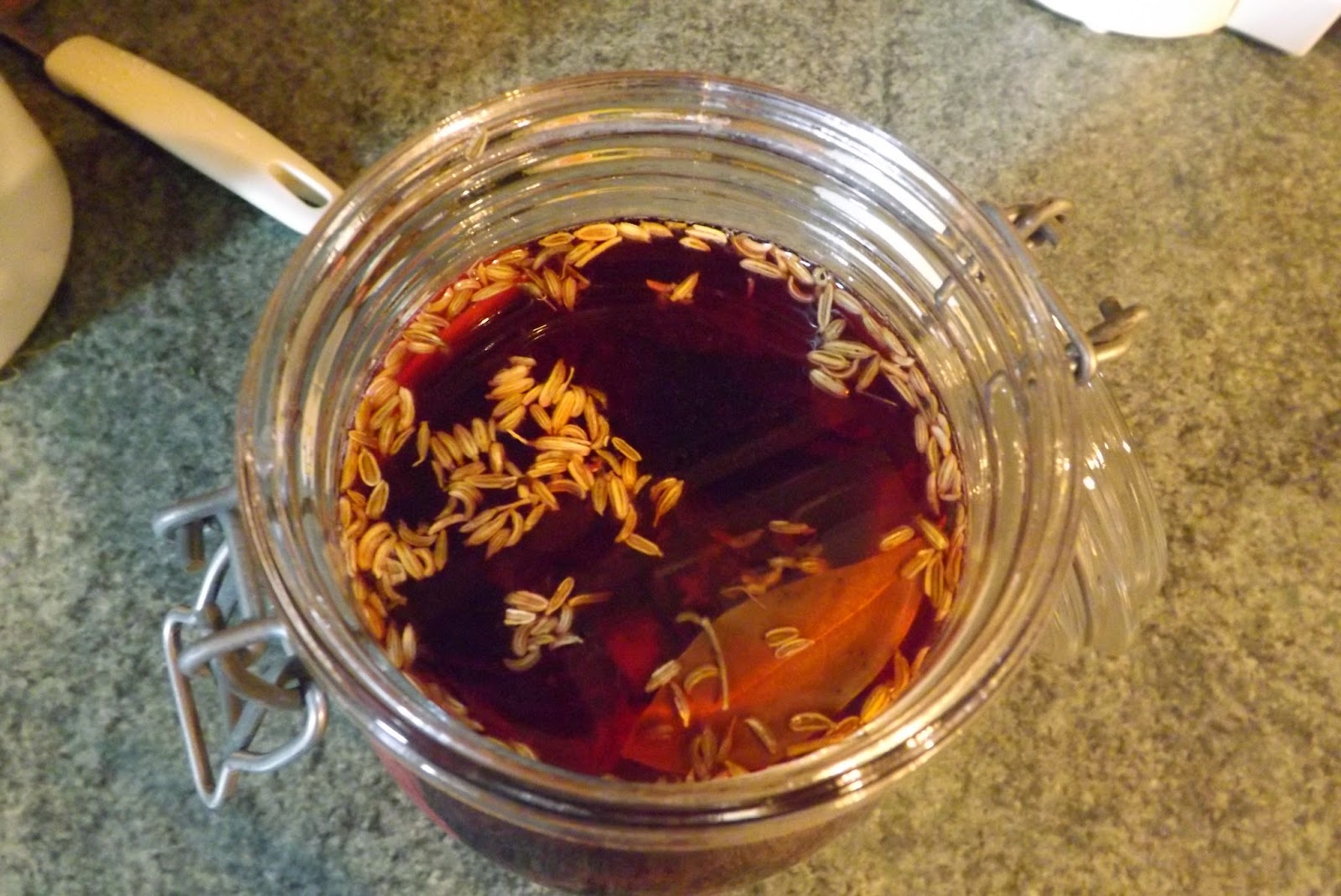 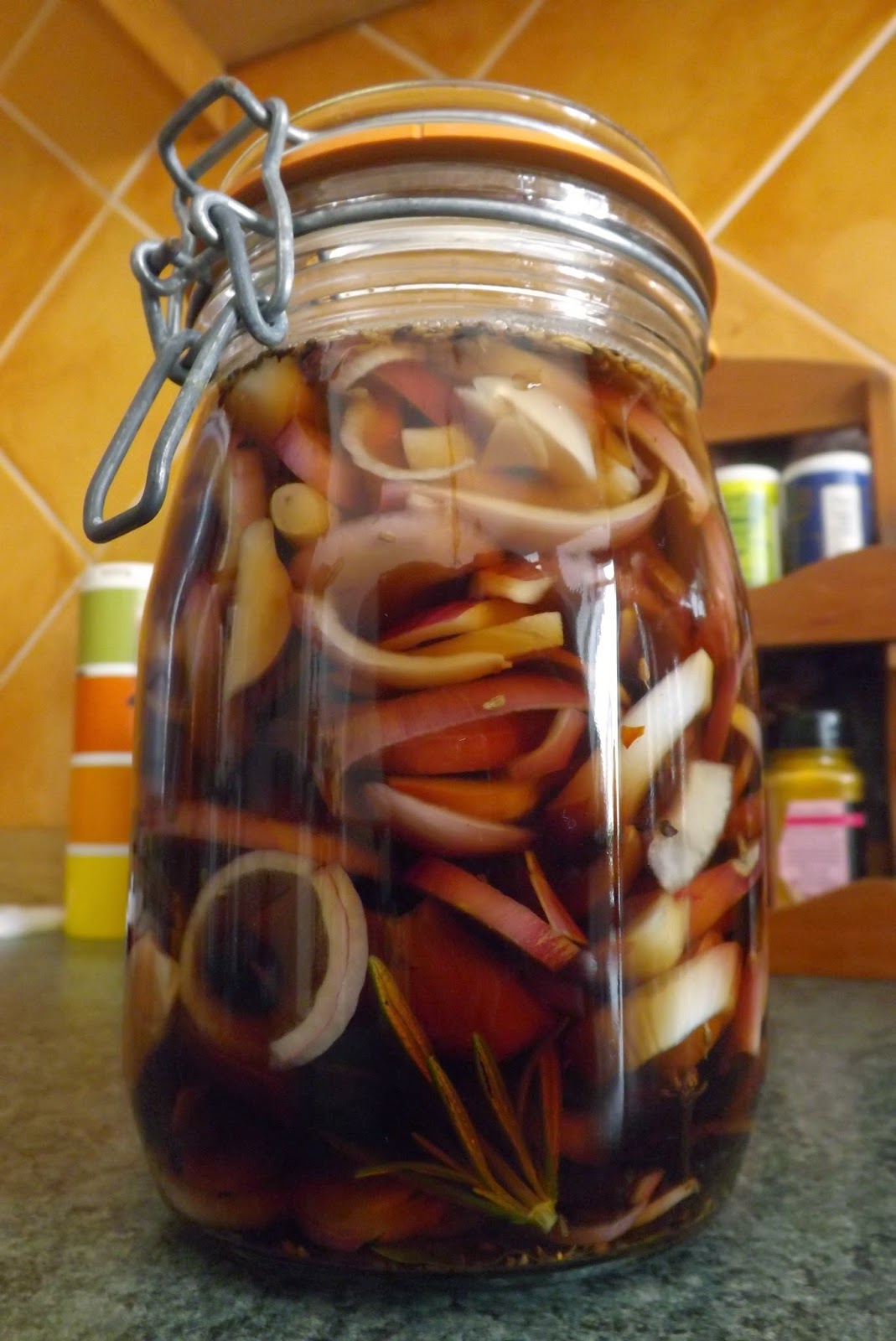 Pickled onions, in vinegar with rosemary

Chris' sister gave us a juicer for Christmas last year, and it turns out beetroot also lends itself very well for juices! Oranges are also in season in spring, and beetroot-orange juice became my favourite juice over these past months. The recipe is something along these lines: juice 4 or 5 beets (scrubbed clean), a knob of fresh ginger, together with about 6 oranges, and a lemon if you wish. The combination of the sweet, earthy beet with the fresh, tangy citrus and ginger is perfect. The only downside is the blood red stains that magically appear everywhere during the preparation and consumption of this juice :)

It was with a bit of a heavy heart that we pulled out the last veggies from the fields where we spent so many of our weekends this winter, but we had some exciting plans for summer and already started planning for the next growing season.

Even though we were not growing any vegetables in summer, we still harvested and processed two other crops later in the year.

First in line were the capers (kappar). The caper bush can be found all around the Maltese Islands (and all around the Mediterranean for that matter) and seems to prefer the most impossible growing places: they are particularly abundant on the high stone fortifications that line the Grand Harbour, where we live. There are however also some shrubs to be found in our fields, and it is there that we harvested our capers. Harvesting is simple: just pinch off the capers from the stem. Back home we washed them and put them in jars with water and a spoon of salt. Then we placed this mix on the roof for about 2 weeks, to allow the capers to ferment. After discarding the bad capers we rinsed the capers and transferred them to clean glass jars, and added vinegar to preserve them. 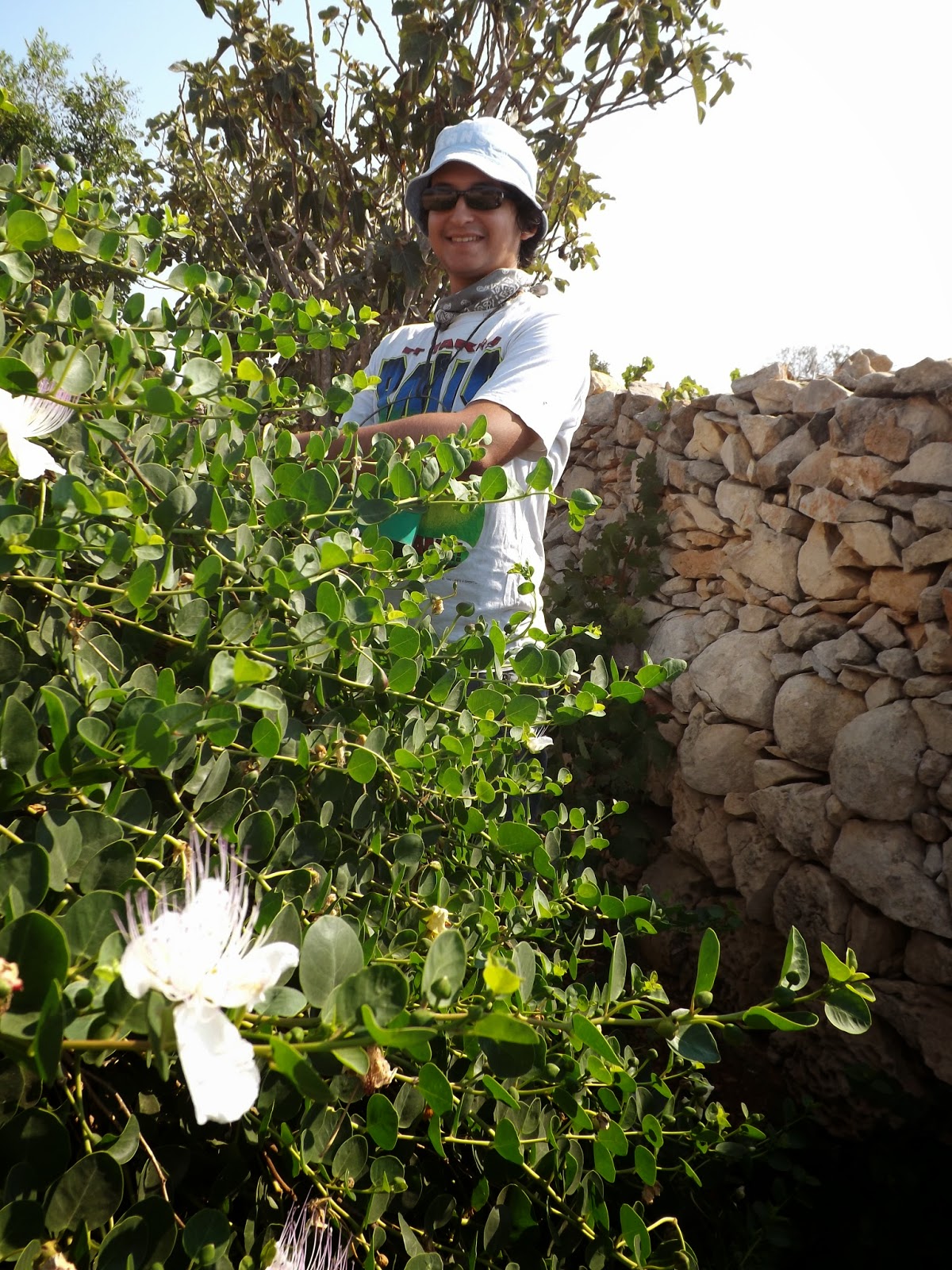 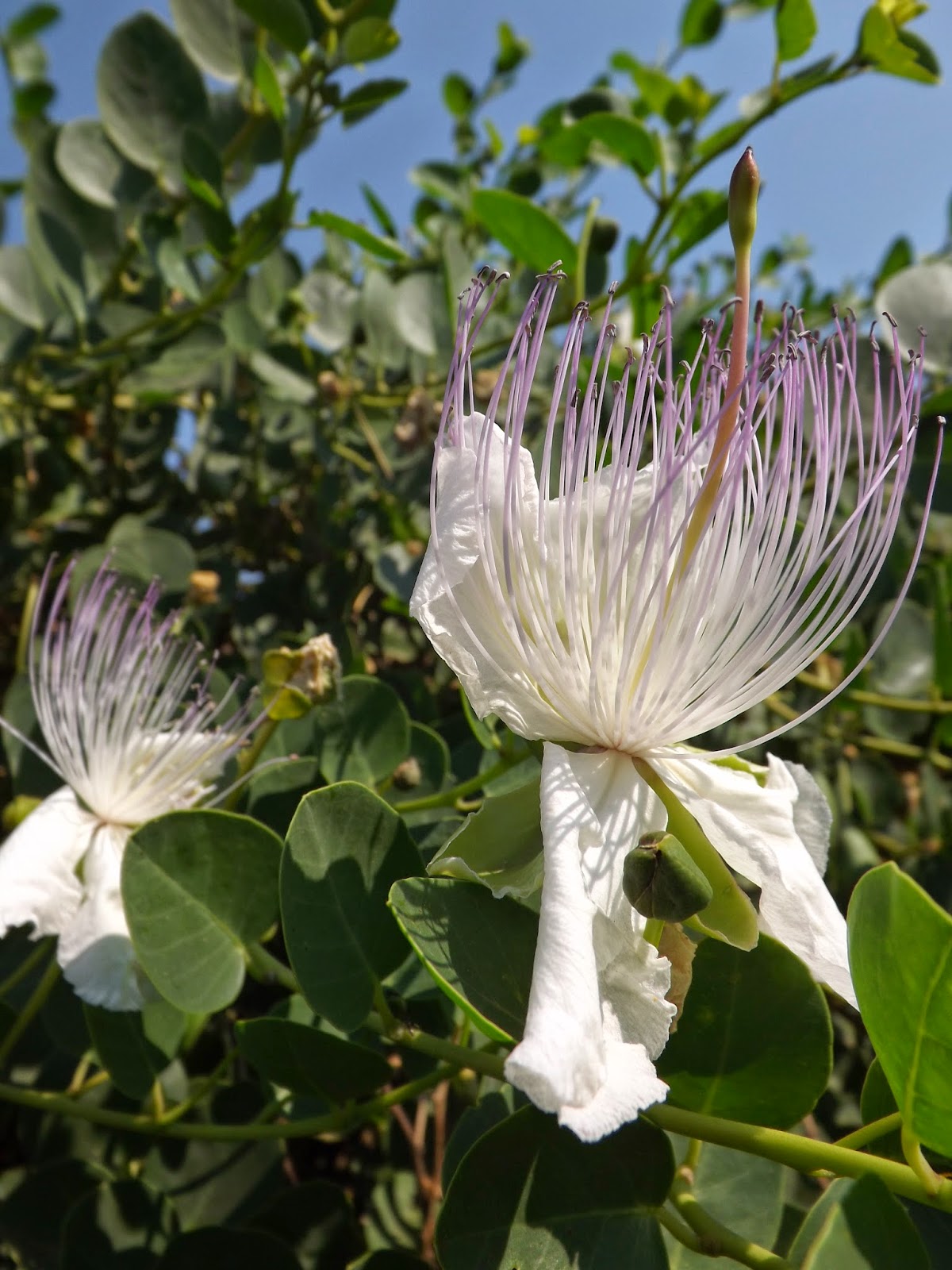 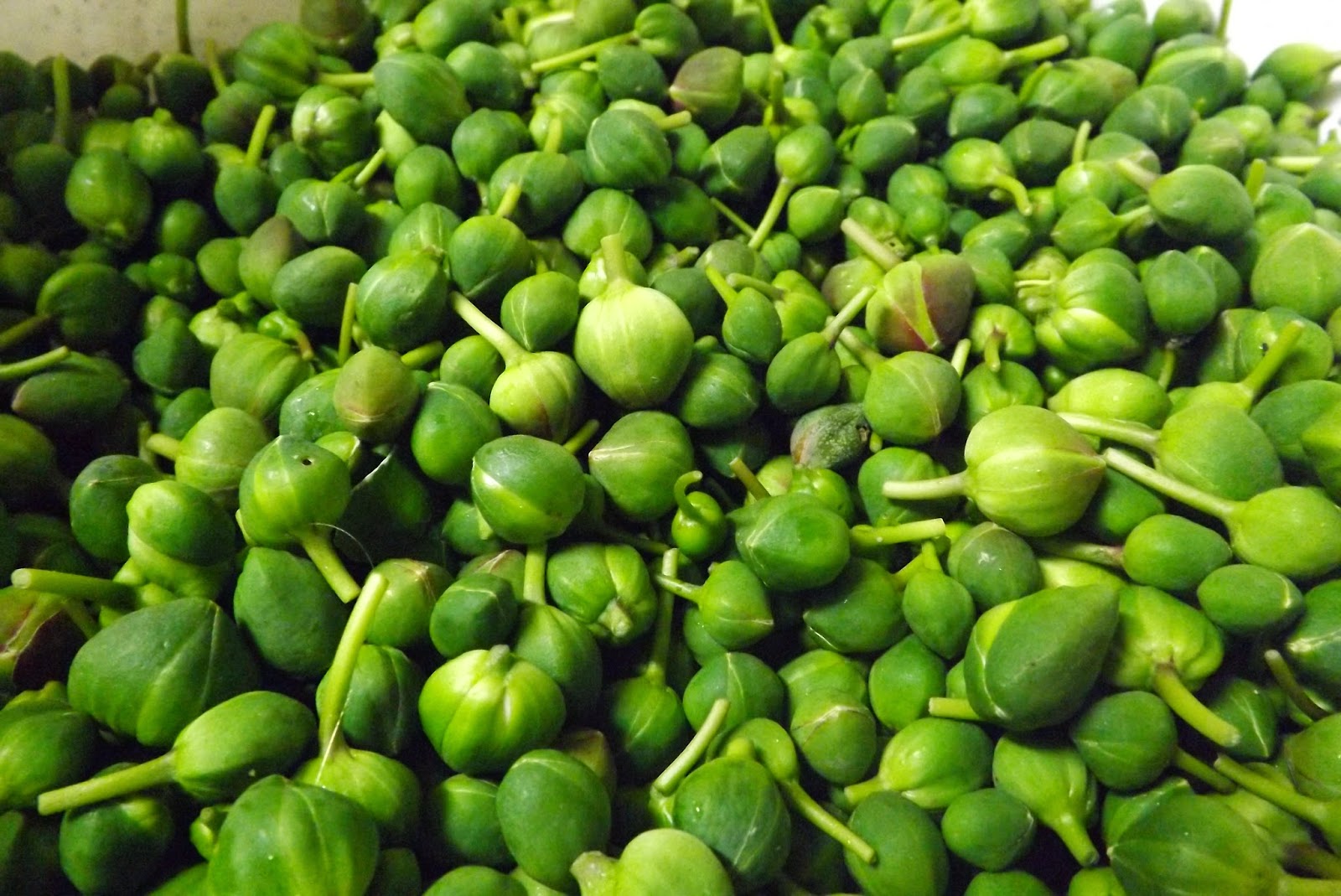 The capers up close 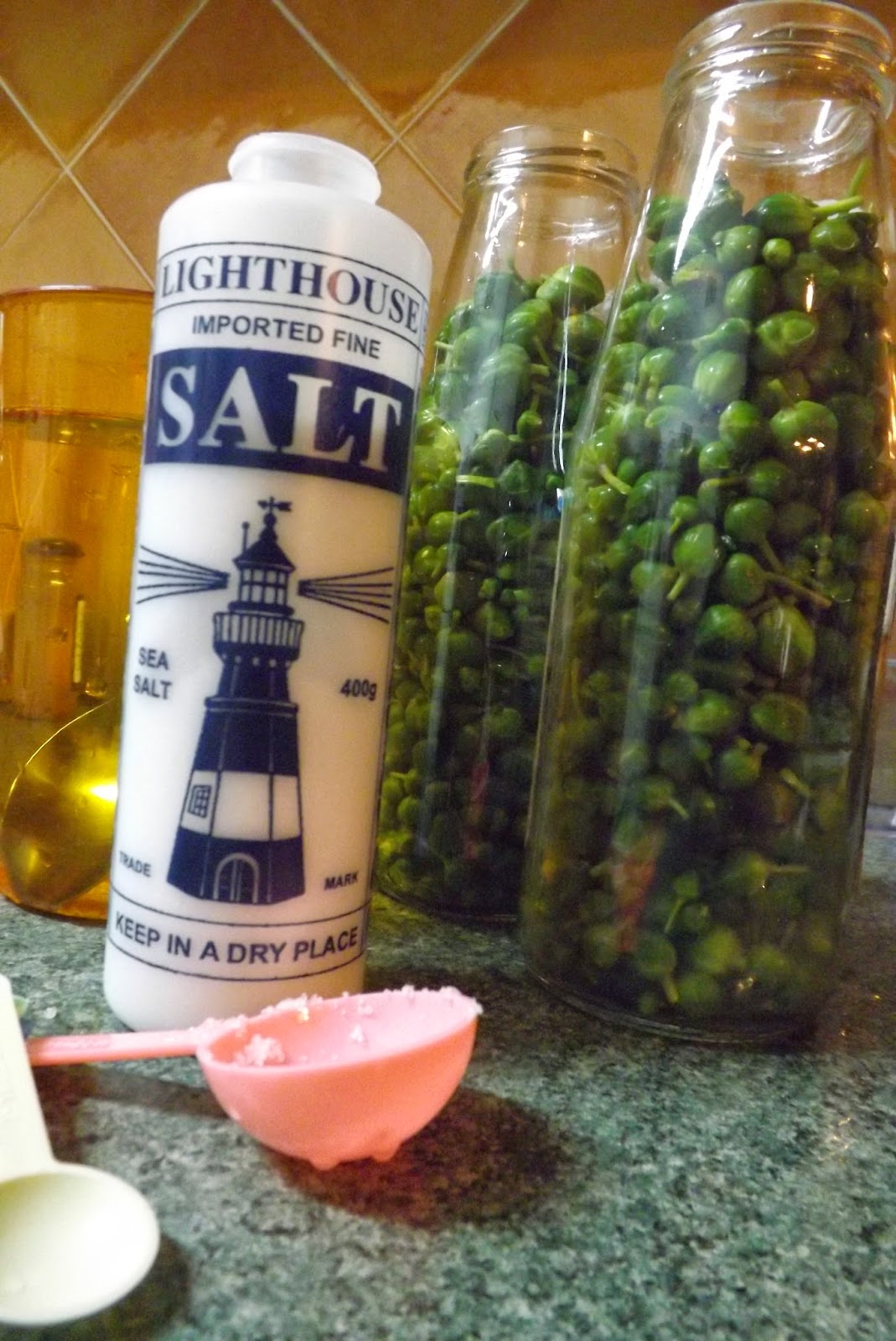 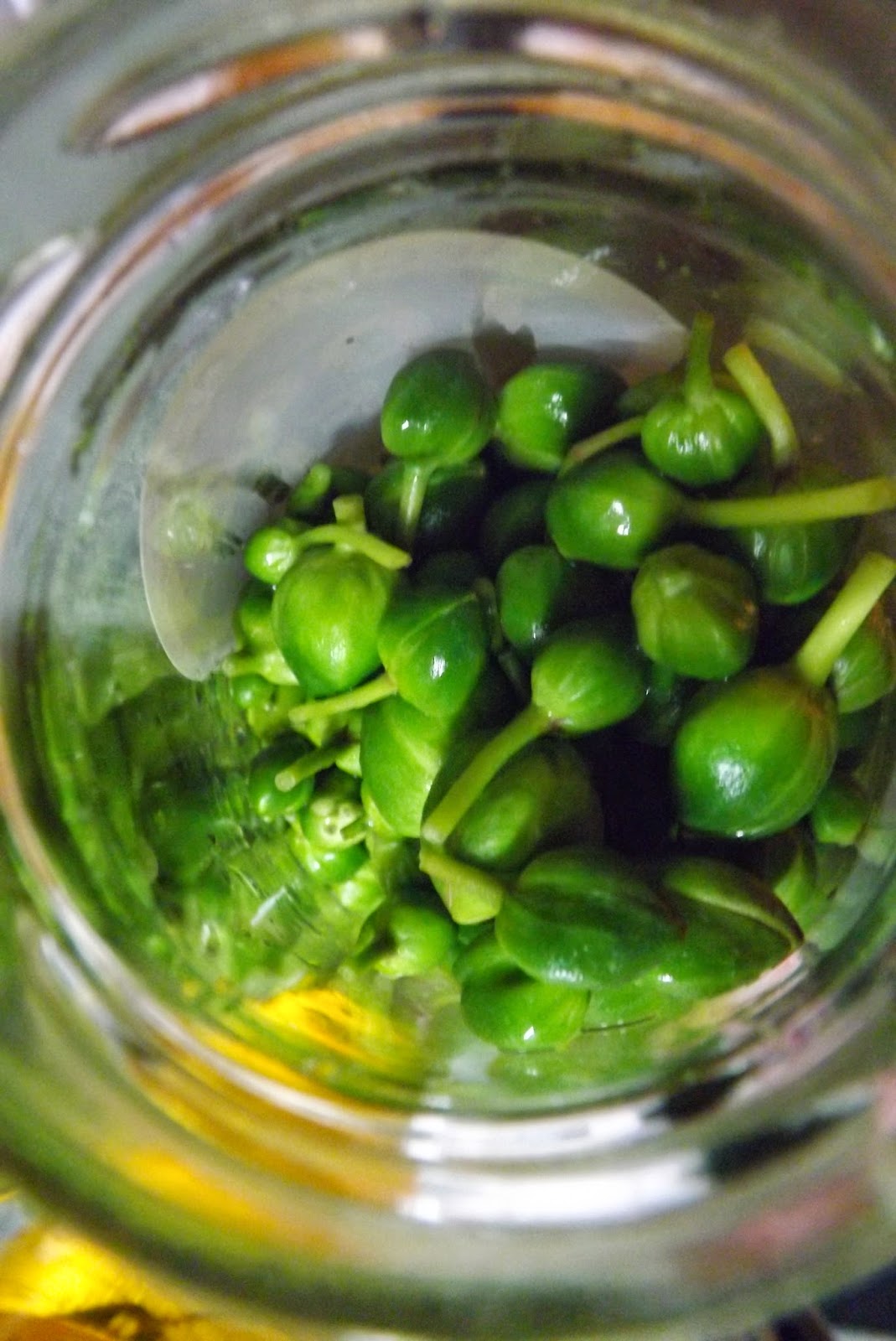 After packing the capers in a jar, just add the brine (water and salt) and put the jar in a sunny spot 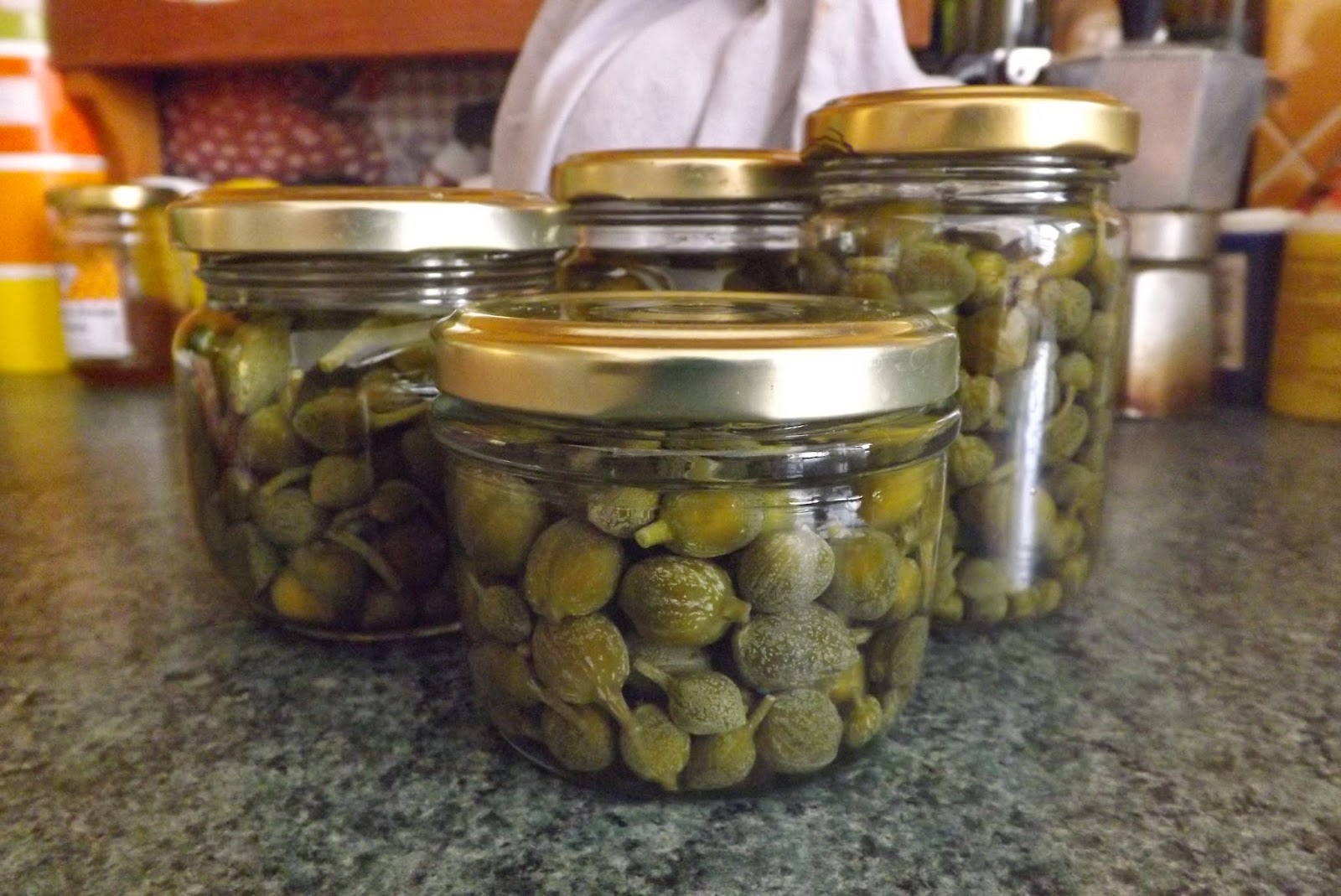 And a few weeks later they look like this! We preserve them in vinegar in small jars, to keep and to give away

Our second summer adventure was carob (ħarrub) picking! We invited some friends and turned it into a carob fest: a weekend of carob picking, camping at the fields, carob syrup making and washing it all off with a refreshing swim! To make the carob syrup, we broke about a kilo of carob pods into smaller pieces, and soaked them in a pan with water overnight. The next morning we prepared a fire and let the mixture boil and bubble away for about an hour. Thereafter we removed the pods and pieces, leaving only a carob infusion behind. Then we added a kilo of sugar, some cloves and cinnamon, and let this mixture boil for another hour or so. The resulting syrup is a great addition to cookies and cakes, and is beneficial to alleviate colds or throat aches, so can be used instead of honey in teas and other syrupy drinks. 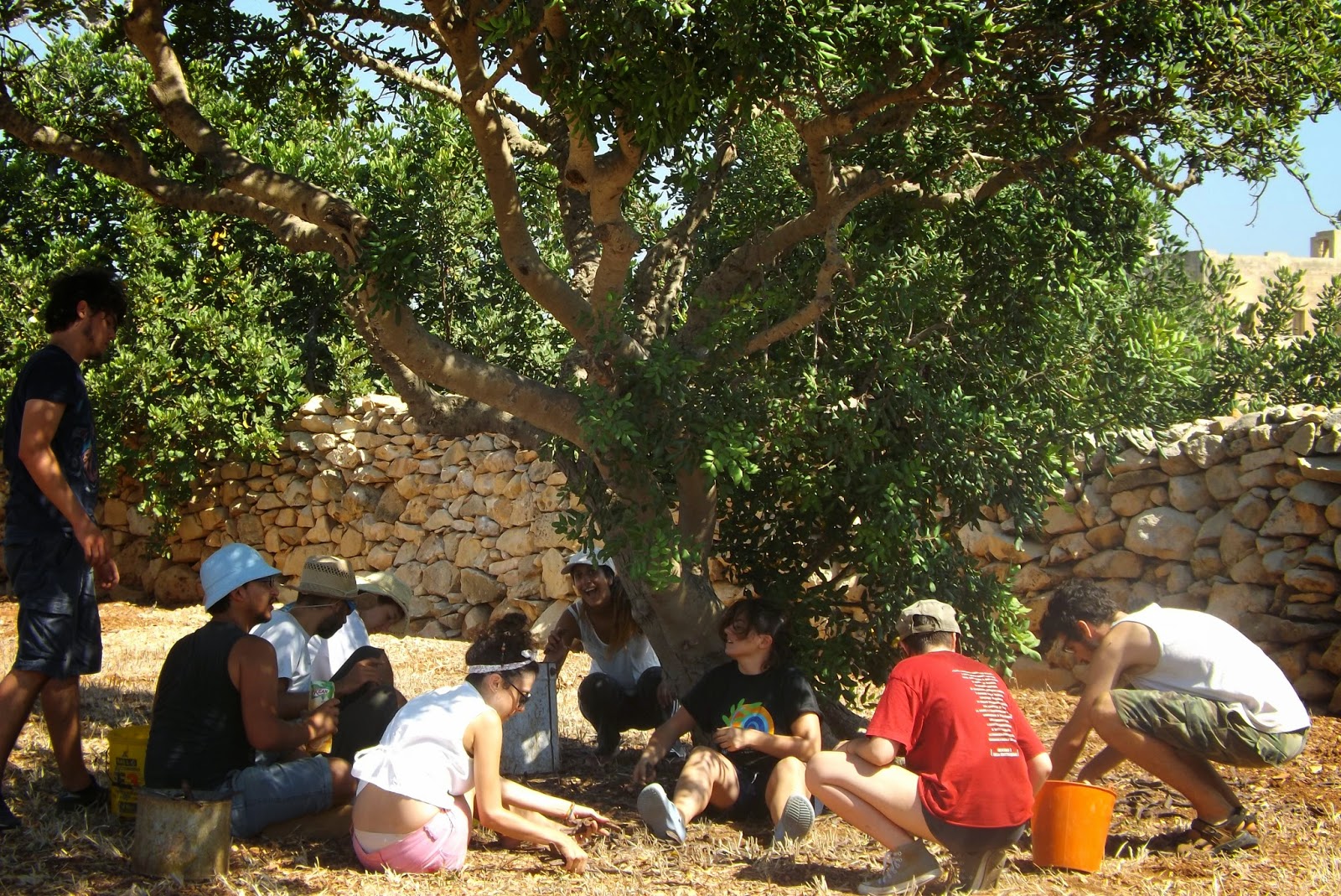 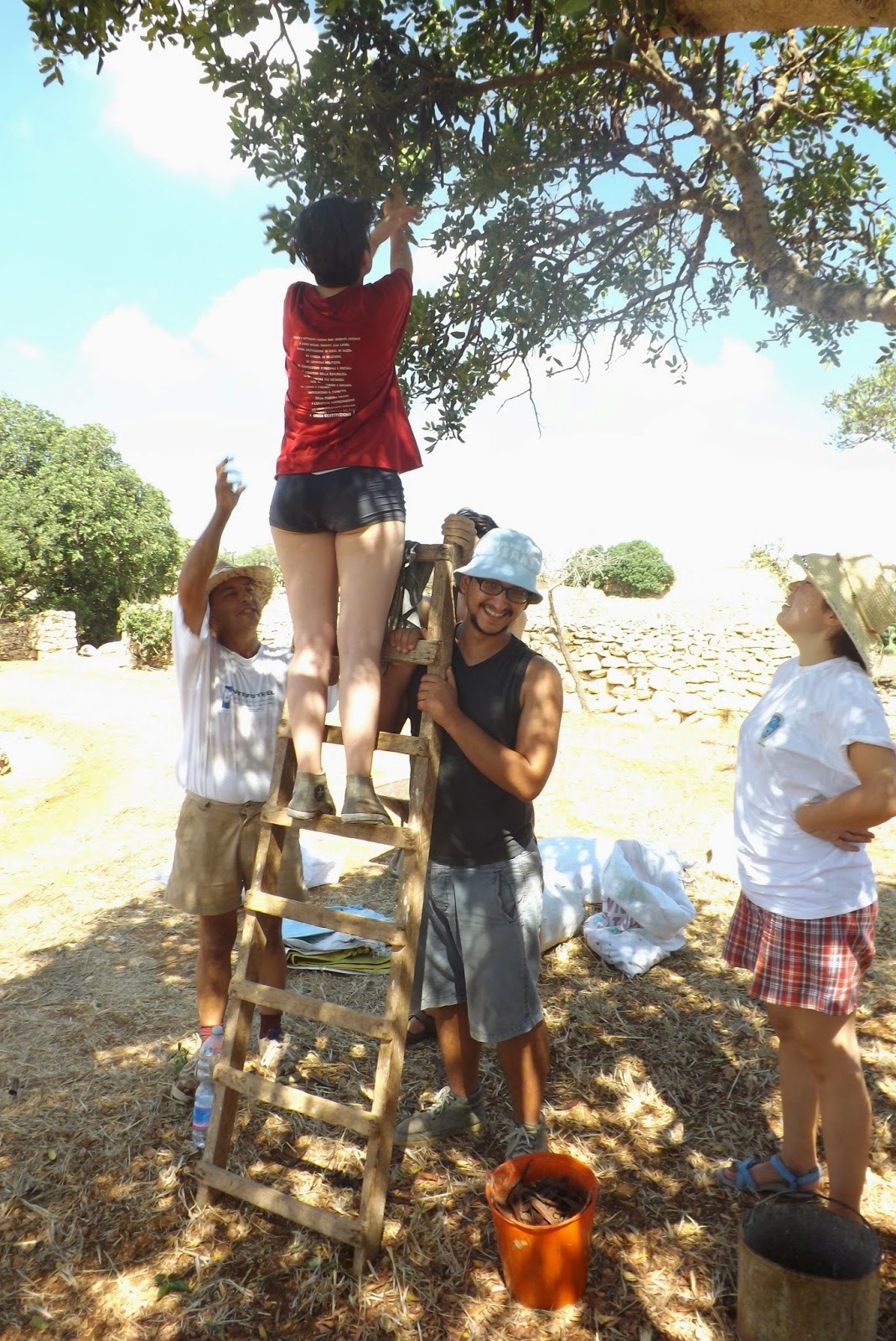 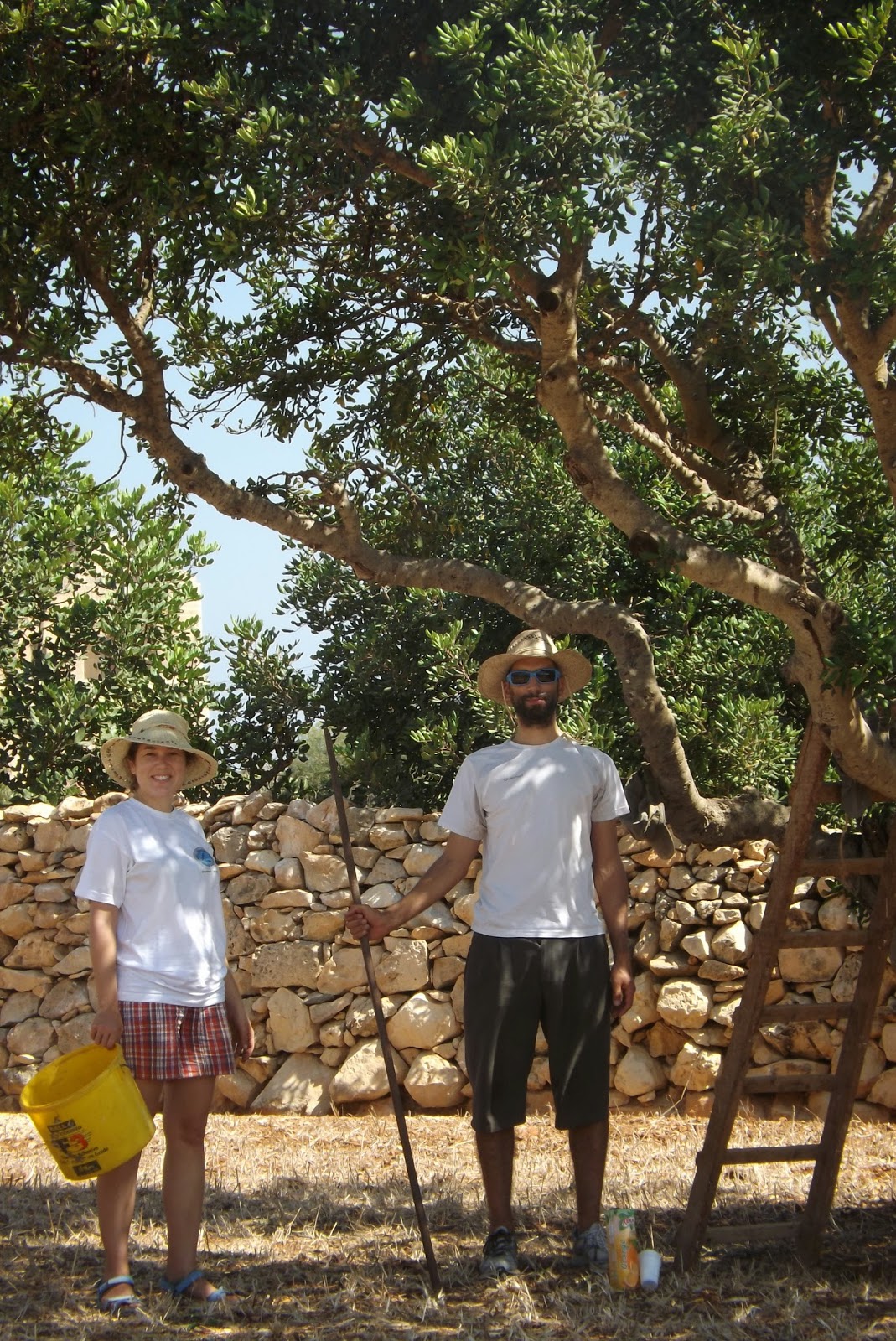 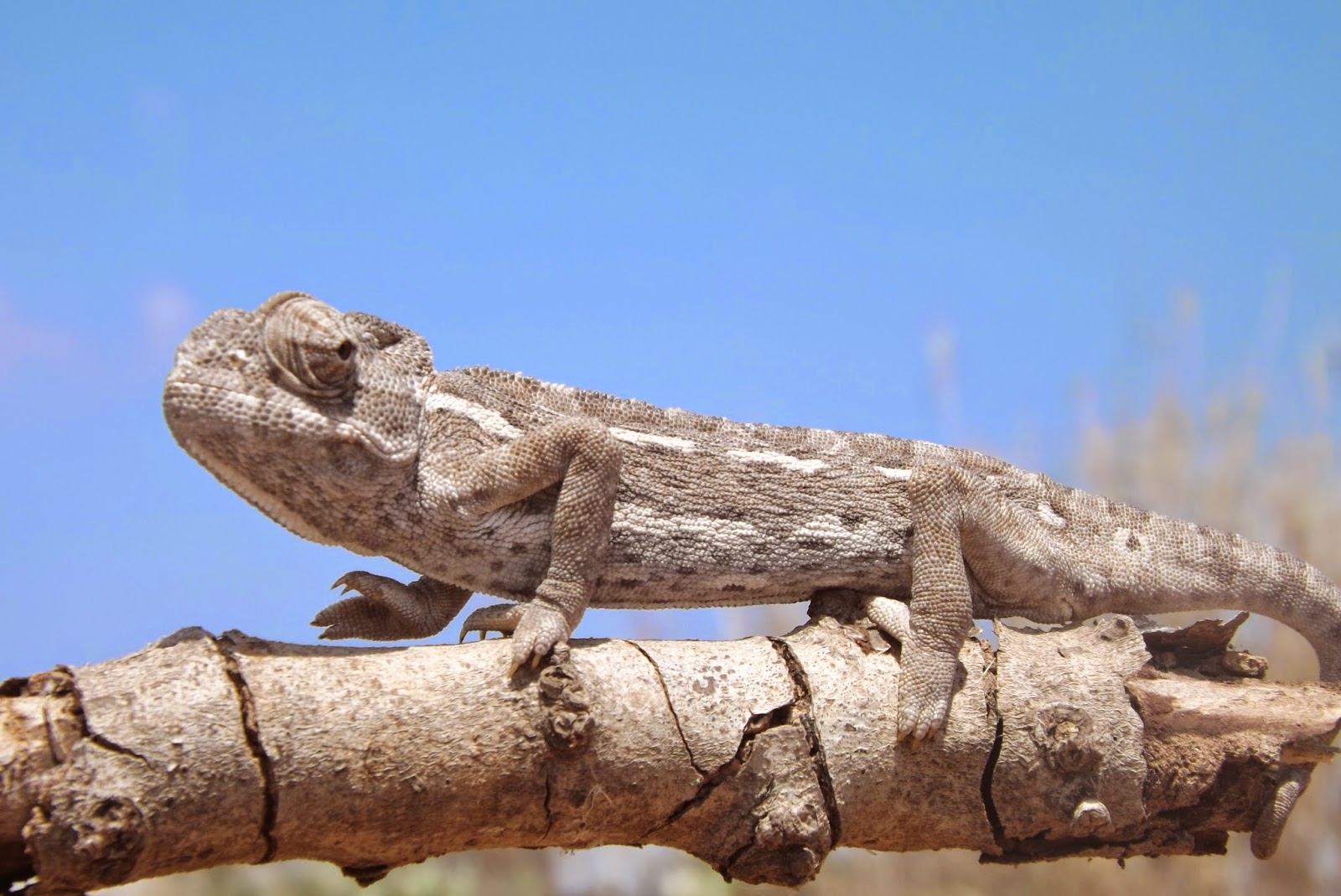 We even had a visitor chameleon (kamaleonte) 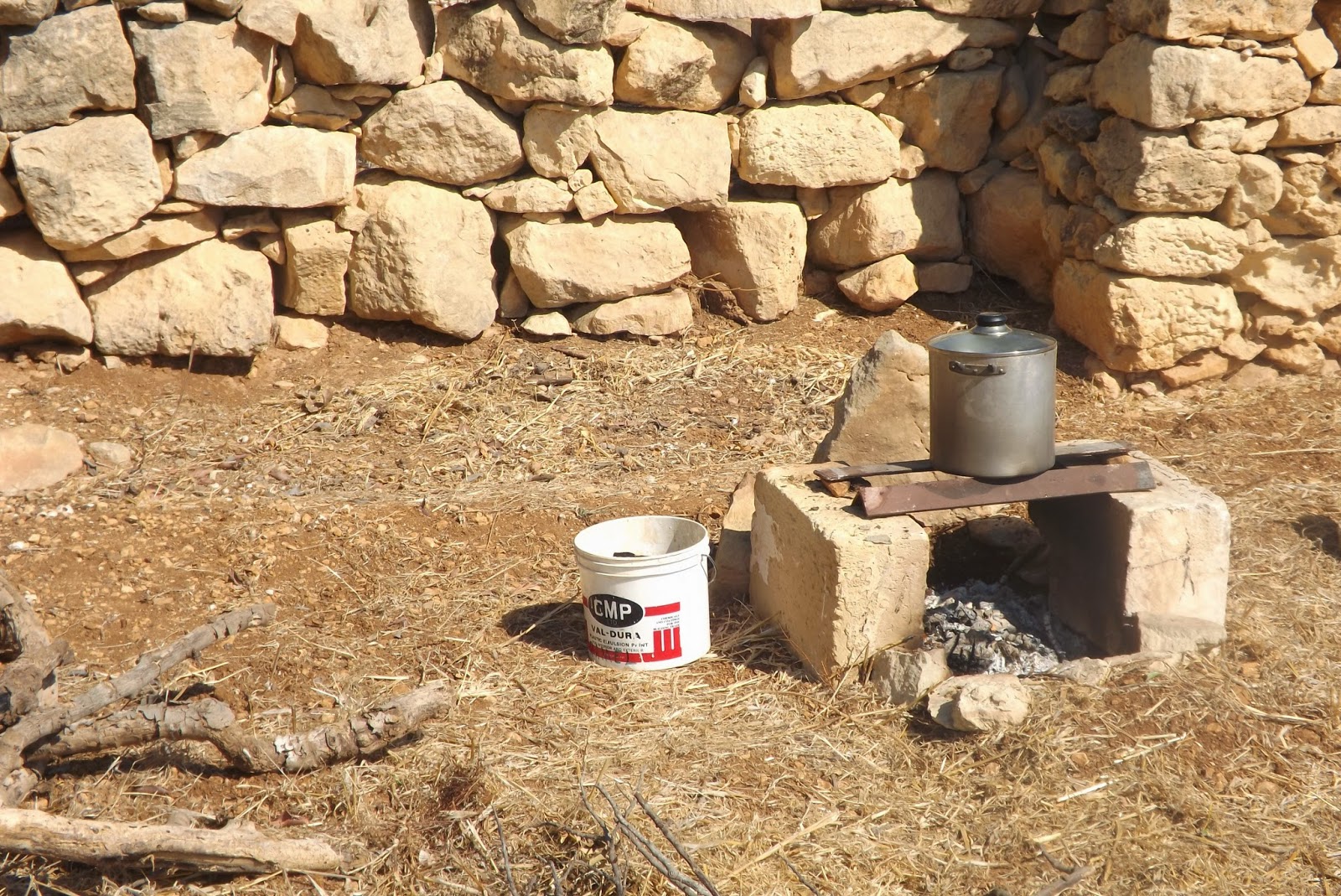 Cooking the carob syrup on an improvised fire 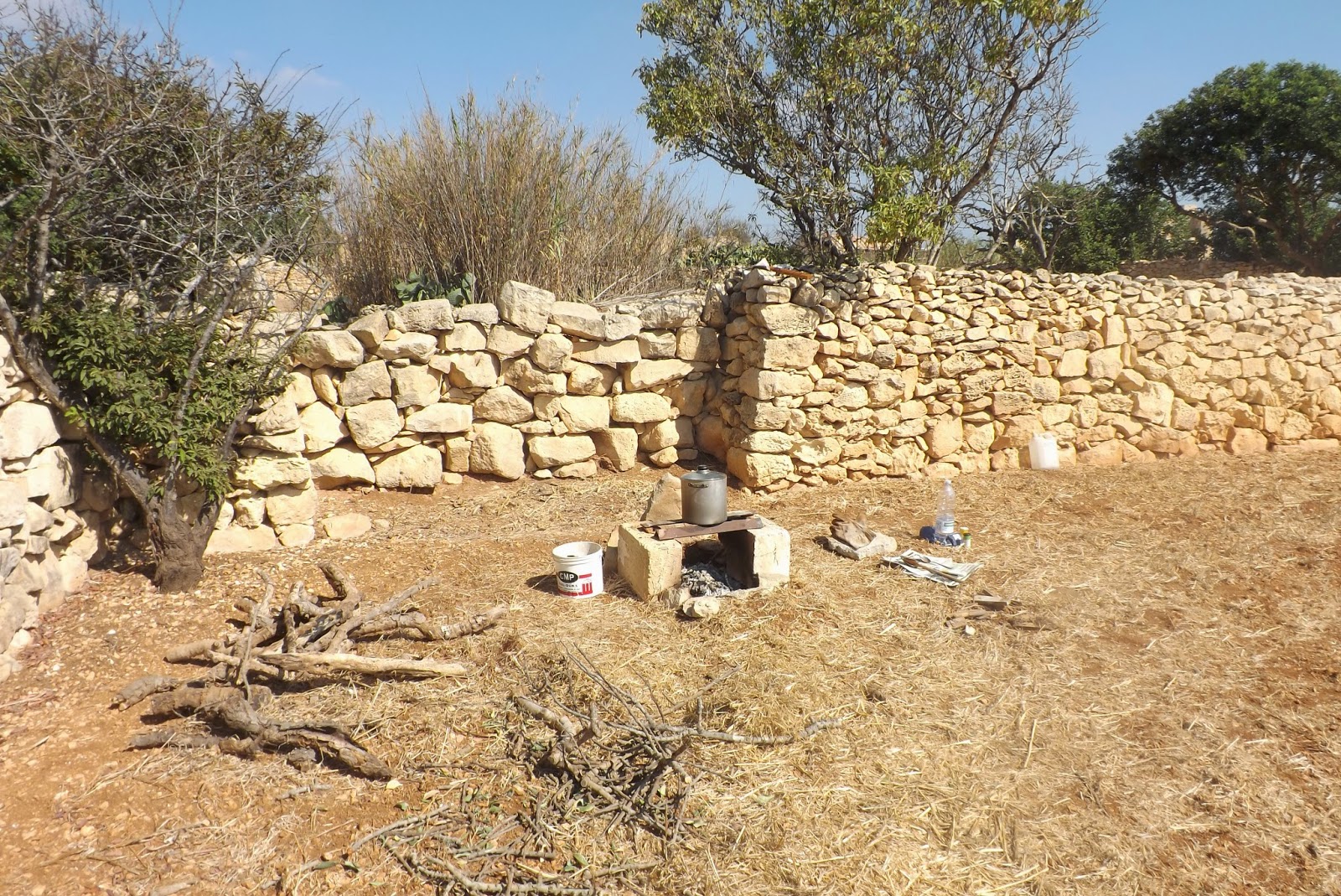 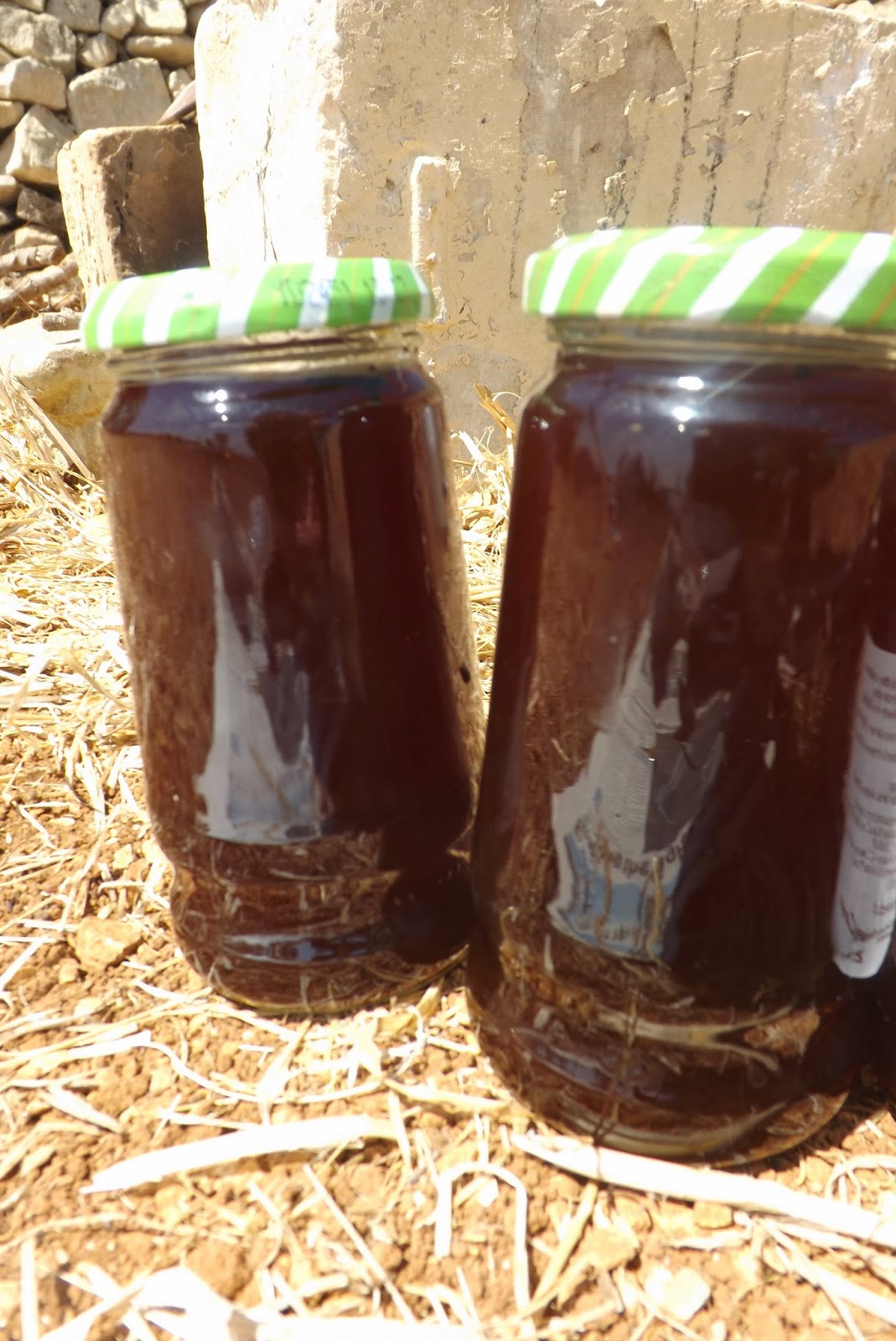 The carob syrup, ready and bottled

The reward: a swim in one of the lovely bays of Delimara: il-Kalanka 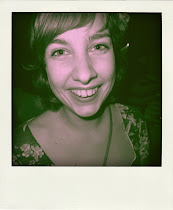 Hi! I'm Suzanne. I am originally from the beautiful island of Texel in the north of the Netherlands, but hopped over to a southern counterpart: Malta, where I live with my boyfriend Christian. I work as a researcher in the environment sector, and in my free time like to grow my own veggies, create all sorts of crafts, cook up a storm in the kitchen, read all those books still on my pile, cycle around the island and hang out with friends :)

Little arithmetics is a classic song by dEUS, one of my favourite bands ever. It is a song that always makes me happy, no matter how often I hear it. Good stuff.